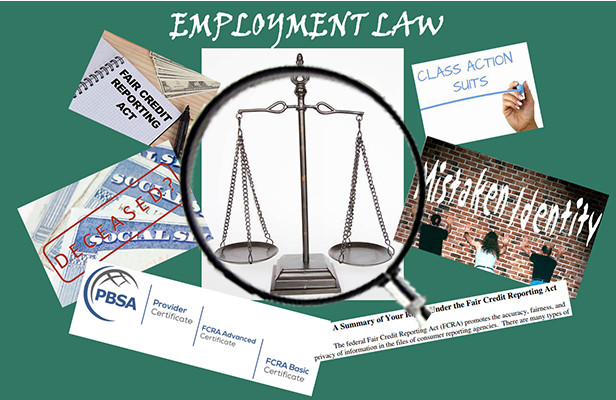 FCRA LAWSUITS CAN PARALYZE YOUR BUSINESS: $200M and Counting

The Fair Credit Reporting Act (FCRA) involves federal legislation that stipulates fair treatment of consumer information in credit reports, consumer reports, and, by extension, background checks. Nearly $200M in lawsuits have been filed against employers as well as background investigation firms for failing to follow basic best practices. The FCRA includes protections for individuals to ensure accuracy, fairness, and privacy of data. If a problem arises, lawsuits can result and can be very costly. Sometimes, the company is found not liable, but the negative press comes with a price. It shouldn’t be left to chance as huge settlements can be involved. For example, earlier this year, Facebook settled a case for $650 million in a class action suit claiming the company violated the Illinois’ Biometric Information Privacy Act by using facial recognition technology to store user data without consent. In light of these settlements, it makes sense for employers to be aware of FCRA cases, learn from other’s mistakes, and implement correct procedures in their hiring processes.

According to a legal analytics company’s 2021 Consumer Protection Litigation Report, “FCRA claims nearly tripled over the last decade.” The following cases will show different types of lawsuits related to FCRA litigation in the background investigation process and what can happen when avoidable mistakes are made. Here are some examples:

When it comes to background investigations, one FCRA rule that gets employers into trouble is not providing disclosures that are “clear and conspicuous” and “in a document that consists solely of the disclosure.” The disclosure usually refers to the fact that a background check will be conducted. Employers must be careful here because the courts take this measure quite literally. In the 2020 case of Walker v. Fred Meyer, Inc., the disclosure document given to the plaintiff included additional information about his rights under federal and state law. Helpful information, right? Well not quite. Although the employer probably meant no harm in providing information on his rights, Walker claimed they violated the FCRA by not disclosing the background check disclosure in a “clear and conspicuous” manner. The US Court of Appeals for the Ninth Circuit (includes Alaska, Arizona and Central District of California) ruled in Walker’s favor cautioning, “that the explanation must not be so long or confusing that it detracts from the disclosure or in any way makes the disclosure unclear and conspicuous.” The takeaway? Only provide separate disclosures that are short and sweet and do not include extraneous details.

When it comes to background investigations, accuracy cannot be stressed enough. After all, people’s livelihoods are at stake as they apply for jobs or maintain their existing jobs. In the case of Williams v. First Advantage LNS Screening Solutions, the plaintiff was wrongly identified as committing crimes he didn’t commit. After Williams was incorrectly mistaken for a criminal in two separate employment background investigations by First Advantage, he filed a Fair Credit Reporting Act lawsuit. The first background report claimed he was arrested and convicted for selling cocaine. The second report claimed he committed burglary and aggravated battery on a pregnant woman. By the time he cleared his name with both of the employers, they had moved on and hired someone else. In 2020, the plaintiff won the case, and the Court affirmed a $250,000 compensatory damages award and reduced a $3.3 million punitive damages award to $1 million.

Another unbelievable suit related to accuracy in the background investigation is the case of a man who sued Checkr, Lyft and Uber over a botched background check. You may find this helpful if you are ever accused of being dead and you are trying to prove that you are, in fact, alive. In this complaint, Donald Buckley, plaintiff, sued the background screening provider, Checkr, Inc., as well as his employers, Uber Technologies and Lyft, Inc. for FCRA violations and demand for jury trial. Buckley had worked for both Uber and Lyft for several years and had annual background checks conducted by Checkr using Buckely’s Social Security Number (SSN.)

Around April of 2021, Buckley received a notice from Uber that there was a problem with his background check and was unable to continue working for them until the problem with his SSN was resolved. He attempted to contact Checkr through several methods, but his attempts went unanswered. In early July, Uber notified Buckley that since he could not correct his background check problem, he could not continue to work for them. It wasn’t until the last week of July 2021, that Buckley was notified by Checkr that the social security number in their files for him was associated with a number on the Social Security Administration’s (SSA) Death Master File and he would have to contact SSA about being reported as deceased.

After Buckley confirmed with SSA that he wasn’t listed as deceased in their records and they would mail him paperwork to help prove he was alive, Checkr still would not correct the error. The same scenario played out with Lyft. He was notified at the end of July 2021 that after a background check was conducted by Checkr, it was reported that he appeared on the SSA Master Death File. He has not been able to correct the situation because “his correct SSN number has been and is currently still uploaded to his Checkr portal.” The error resulted in Buckley losing the opportunity to work for both Uber and Lyft.

According to the complaint, “it is unclear why Checkr continued to inform Plaintiff that it is unable to verify his SSN number as that belonging to a living individual when the SSA confirmed that their files reflect that Plaintiff is alive and stated that they will be sending him proof of this.” It also mentions that Checkr “…fails to employ procedure to assure only maximally accurate consumer information is compiled and published in the consumer reports it sells to third parties for a profit.”

This case demonstrates the need for background screening providers to verify that the information they are reporting is accurate. If you have questions about the integrity, responsiveness, or accuracy of your background investigation agency, it may be time to move on to a more trustworthy resource.

In order for a person to bring an FCRA violation claim in federal court against an employer or background investigation company, the Supreme Court has established legal rights or “standing” for a basis to move forward. A plaintiff must establish that they meet the legal criteria for standing which involves:

As mentioned, there have been significant FCRA cases where the courts ruled there was “no concrete harm, no standing” and ruled in favor of the defendant. In the case of TransUnion LLC v. Ramirez, a California dealership ran a credit check on the plaintiff when he and his wife sought to purchase a car. The credit check provided by TransUnion, indicated a potential match between the plaintiff’s name and a name appearing on a list of terrorists maintained by the U.S. Treasury’s Office of Foreign Assets Control (OFAC). The plaintiff sought to represent a nationwide class of individuals who received a similar letter from TransUnion indicating the recipient’s name potentially matched a name on the OFAC list. Out of 8,185 individuals, only 1,853 had this information disseminated to a third party.

After six days of trial in 2012, the jury originally returned a verdict for the plaintiffs, awarding each class member $984.22 in statutory damages and $6,353.08 in punitive damages for a total award of more than $60 million. In February 2020, the U.S. Court of Appeals for the Ninth Circuit held that all members of the class had Article III standing to recover damages, but they reduced the punitive damages award to $3,936.88 per class member, for a total of $40 million. On June 25, 2021, the Supreme Court reversed the Ninth Circuit on the grounds that only the 1,853 class members have standing for the claim. The court ruled that the 6,332 individuals who didn’t have their reports provided to a third party did not suffer “concrete harm.” Only those (1,853 class members) who had erroneous derogatory information disseminated to a third party would be recognized as a “basis for relief.” This case is significant because it means that every member of the class action suit must establish Article III standing to be awarded individual damages.

When choosing a company to perform background investigations, be sure they know how to protect you from FCRA lawsuits. Examples of decisions finding employers in violation of FCRA legislation are extensive with record-breaking settlements in class actions over the past several years. Background investigation companies that prioritize FCRA certification can help mitigate that risk. The Professional Background Screening Association offers training for FCRA Basic Certificates, Advanced Certificates and PBSA Criminal Research Provider. These certifications teach FCRA concepts, terminology, basic rights and duties of end users, consumer litigation and regulatory enforcement. Advanced certifications focus on what constitutes “maximum possible accuracy” and disclosure form compliance among other things.  PBSA Criminal Research Provider certification demonstrates a knowledge of responsibilities as it relates to criminal history, FCRA compliance, data retention and security, as well as correcting information, disputes, and complaints. Be sure your background investigation company is a member of the Professional Background Screening Association, and their background investigators maintain proper FCRA certification so that your company can avoid lawsuits.