FCRA Violations: How to Avoid a Lawsuit when Conducting Background Investigations

FCRA Violations: How to Avoid a Lawsuit when Conducting Background Investigations 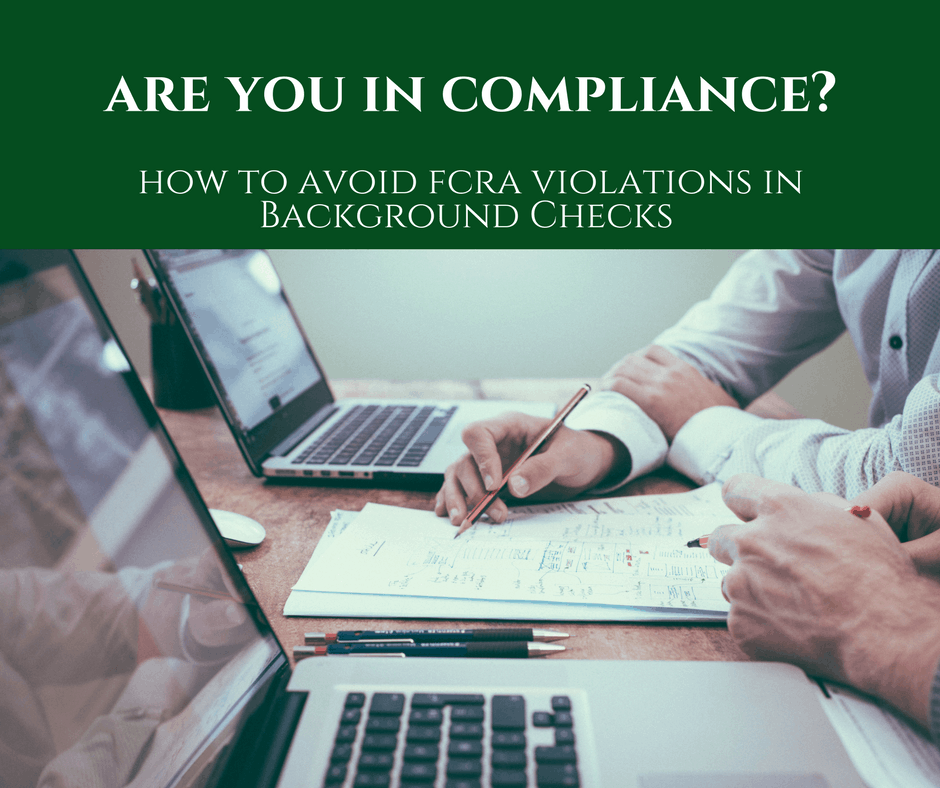 Background investigations are a critical component of the hiring process. In today’s complicated world, it is irresponsible not to verify the reliability, safety, and qualifications of potential hires. It’s equally important, however, that your company be sure its pre- and post-employment background checks are being conducted properly and within guidelines of the FCRA.

The FCRA, or Fair Credit Reporting Act, is a United States federal law promoting the accuracy, fairness, and privacy of consumer information in credit reporting. In essence, consumers have the right to know what information is in their file, whether information in their credit report has been used against them, and to dispute anything contained within the report that they know to be false. A reasonable expectation of privacy is also promised to consumers under the FCRA. You can read more about the FCRA’s consumer rights here.

Credit checks are a common part of a pre-employment background investigation. Since these checks fall under the jurisdiction of the FCRA, it’s important to verify that the company performing your background checks is adhering to the legislation. Failure to properly comply with FCRA regulations can put your company at risk for significant legal action and financial responsibility.

All too often, FCRA violations come back to haunt a company. A number of recent high-profile court cases, many of which were class-action lawsuits, have brought to light the significance of upholding the FCRA. If employers are found in “willful violation” of the legislation, potential employees are eligible to collect actual or statutory damages in an FCRA suit, the latter of which can range from $100 to $1,000. Costs to companies can be staggering, however, particularly when multiple parties are involved. Settlements in major cases have ranged from $6.8 million against Publix supermarkets, $2.5 million by Domino’s Pizza, and $4 million by Dollar General.

In October 2017, Home Depot narrowly dodged a significant class-action lawsuit that alleged unlawful language in pre-employment screening waivers. Another 2017 suit involved a second background report after a partial report was provided to a job applicant. Both reports included the same adverse findings, but the employee never received the second, complete version, which the court found to be an FCRA violation. All adverse actions must be reported to the applicant.

Examples of legislative decisions finding employers in violation of the FCRA legislation are extensive, and it’s no wonder–hiring is complicated, positions need to be filled quickly, and the legalities of the Fair Credit Reporting Act are difficult to understand. Trusting pre- and post-employment background screenings to a dedicated investigative firm is an excellent way to mitigate risk and ensure you have performed your due diligence.

Alliance Risk Group. is a full-service investigative firm well-versed in the Fair Credit Reporting Act that conducts best practice background checks in a variety of industries, regardless of your company’s size or geographic location. Alliance believes in being proactive, not reactive! Contact us with questions about the FCRA or to set up an employment background screening today!