3 Recent FCRA Lawsuits and How to Protect Yourself 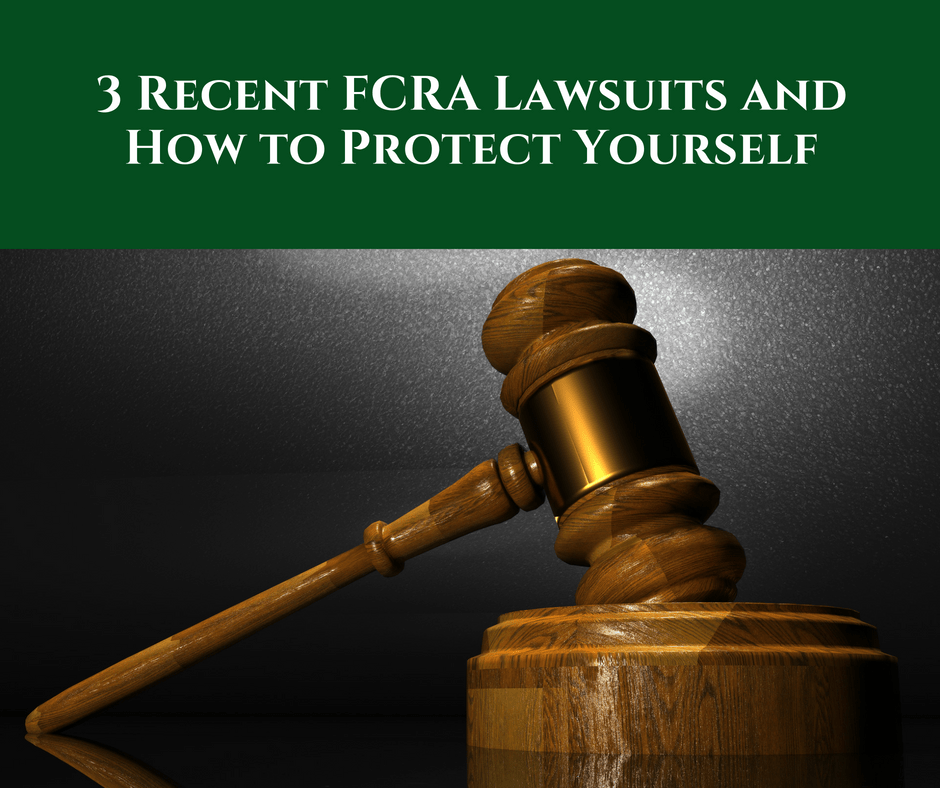 When conducting background investigations or ordering them for your company, it’s imperative that you follow the guidelines of the Fair Credit Reporting Act. You are likely familiar with the act, which stipulates the fair treatment of consumer information in credit reports, consumer reports, and, by extension, background checks.

The FCRA is a United States federal law, so there’s no wiggle room when it comes to properly abiding by its rules. The FCRA was designed to promote the accuracy, fairness, and privacy of consumer information in reporting. Essentially, its purpose is to protect consumers, who have the right to know what information is in their file, whether information in their report has been used against them, and to dispute anything contained within the report that they know to be false. A reasonable expectation of privacy is also promised to consumers under the FCRA.

Despite the FCRA’s seemingly black-and-white rules, it’s all too easy to find yourself in violation. This is partially due to the many complexities of the act, as well as confusion surrounding enforcement. All too often, major companies find themselves involved in class action lawsuits as a result of background investigations that violated, or are accused of violating, the FCRA. The decisions made in each of these cases can be used as precedent for future legal battles. Because of this, it’s important that companies conducting background investigations on employees stay up-to-date on FCRA lawsuits. Doing so can help to prevent making them from same mistakes.

At the end of April 2018, PetCo reached a $1.2 million settlement with two job applicants who claimed that their rights under the FCRA had been violated. Plaintiffs Jacklyn Feist and Angelica Zimmer engaged in a two-year legal battle, arguing that approximately 37,279 job applicants were subject to the company’s allegedly unlawful background check policies. They claimed that PetCo violated the FCRA by not providing a separate “stand alone” document disclosing its background check policy to individuals who would undergo a background check.

The moral of the story here is that you always need to disclose the background check policy to applicants. Failure to do so, clearly, can cause significant trouble down the line.

While not quite a lawsuit due to mismanaged background checks, the recent data breach by consumer reporting giant EquiFax also constitutes a violation of the FCRA. The company has faced a significant backlash from consumers, many of whom have sued EquiFax in small claims court and won amounts of up to $10,000 for their trouble.

At the end of 2017, Avis paid out $2.7 million to settle a class action lawsuit originating from FCRA violations. The car rental company had conducted background checks on job applicants but failed to properly follow rules regarding reporting of past convictions.

The plaintiff, Angela Fuller, claimed that her 2015 background check violated the FCRA because it included a mistake that listed a 1985 infraction as a conviction. Depending on your jurisdiction and the type of crime, Consumer Reporting Agencies must be cautious in properly reporting historical criminal convictions vs. other “infractions”. ay mare often only supposed to list convictions for the past seven years.

As a company conducting background checks, the best way to combat this sort of problem is to know the FCRA and know your state and local laws for conviction reporting. Mitigating Risk is a complicated process and requires application of due-diligence and abiding by legal statues.

Trusting pre- and post-employment background screenings to a dedicated investigative firm is an excellent way to mitigate risk and ensure you have performed your due diligence.

Alliance Risk Group. is a full-service risk mitigation  firm specializing in comprehensive background investigative solutions. Our team is well -versed in the Fair Credit Reporting Act that conducts best practice background checks in a variety of industries, regardless of your company’s size or geographic location. Alliance believes in being proactive, not reactive! Contact us with questions about the FCRA or to set up an employment background screening today!

How Often Are Claims by Employees Exaggerated or False?BLOG, Investigative

How Can My Company Use Social Media to Vet Employees?Background Checks, BLOG